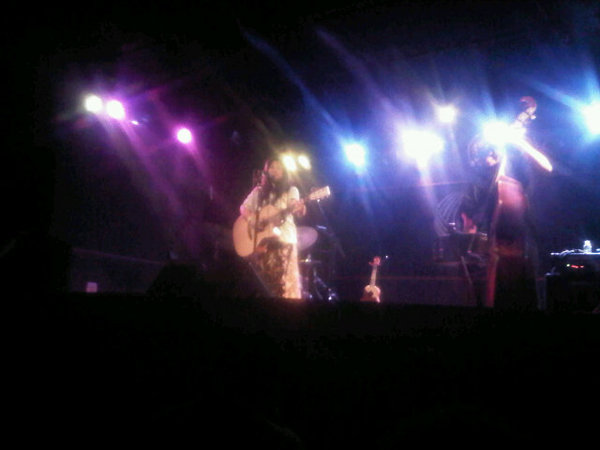 Since I came back to NYC from Malaysia this past spring, Zee Avi was the one artist I’ve been dying to see. This woman has quite literally captivated the hearts and minds of all Malaysians and they are mad proud of her achievements. Her story is quite familiar to her fans: she started posting videos on YouTube in the fall of 2007 for her friends and shortly after posting her “last” video, an original song called “No Christmas for Me”, she received thousands of messages including label offers. She went on to sign with Jack Johnson’s label, Brushfire Records, and was flown to LA where she began work on her debut album. Her debut, Zee Avi, was released in May 2009 to critical acclaim and she’s since been promoting the album and touring, including a stint at this year’s Lilith Fair. Her sound is unbelievably mature and forward thinking. Her lyricism is often remarked upon for using terms such as “German expressionism films” and “Kierkegaard” – not your everyday kind of lyric.

The show opened up with singer-songwriter Paleo. It was difficult to gauge with Paleo or his music; he didn’t try to engage with the audience and his voice (or the tonality he chooses to employ) hindered the audience’s connection with his songs. You couldn’t understand half of what he was saying and whether he was deliberately exposing the breaks in his voice and going off key, neither of which were done in a cheeky way so as to elicit the audience’s response.

Soon afterward Zee herself came up to introduce the second act, a delightful musician named Mishal Moore. She sets to work at loosening the audience up and starts talking, introducing herself and her songs. We learn, among a few other tidbits, she plays the guitar like a bass because otherwise she can’t play it, and how an ex-boyfriend named Brian makes an appearance in a few of her songs. Simply put, her set was wonderful. She could have sang the entire set a Capella and it wouldn’t have detracted from the impact; she has a great voice (the singer in me also wants to remark on how she has such good control over her voice too, but I digress) and her songs are catchy without being at all simplistic and kitschy. For example take a look at the song “Makeup Sex” – once you forget the title, you get into the crux of the message: “Let’s just have/makeup sex/don’t wanna argue no more/cause that’s what making love is for.” Awesome.

Mishal’s set picks up the audience’s energy in time to introduce the woman of the hour, Zee Avi. Zee’s small stature leaves you wondering how that sound and energy attributed to the musician comes out of such a pixie-sized woman. But it doesn’t detract in anyway from her talent and from the energy. Zee’s accompanied by her band, made up of a drummer and bassist and she’s outfitted in a T-shirt, batik sarong, and flip flops. Like Moore before her, she engaged the audience in a conversation (with some of the not-so-sober engaged in a call-and-response with the singer) telling them of her home country, Malaysia (“We have microwaves, we don’t live in trees.”) and how they were “awesome like four”. Audience participation in her songs were encouraged and she asked the audience to chime in and sing along in “Bitter Heart”, “Just You and Me” and “Honey Bee”. After a little technical difficulty with the electric equipment and her ukelele, she introduced new songs, “Madness” and “31 Days in June” about homeslessness – her zip code for two months was “couch”, she said.  She ended the night with a song she and her band had written that very day about her tour manager, Jim. The hook “Jim, are you sleeping” was a hit with the audience and Zee showcased her dancing skills while the audience sang along. Jim, who had remedied the ukelele issue just moments earlier, looked on and laughed. After the show he told those of us who stayed behind how four shots of espresso in a frappuccino were needed to drive the band from Cleveland to Philly at three in the morning.

The show was delightful and for me, at least, a moment to celebrate. I’ve been missing Malaysia for quite some time now and seeing Zee Avi up there doing her thing made me miss it a little less. I hope to have more moments like this – enjoying some good music with down-to-earth artists and singing about sleepy tour managers – in the future. Til then, there’s always YouTube.