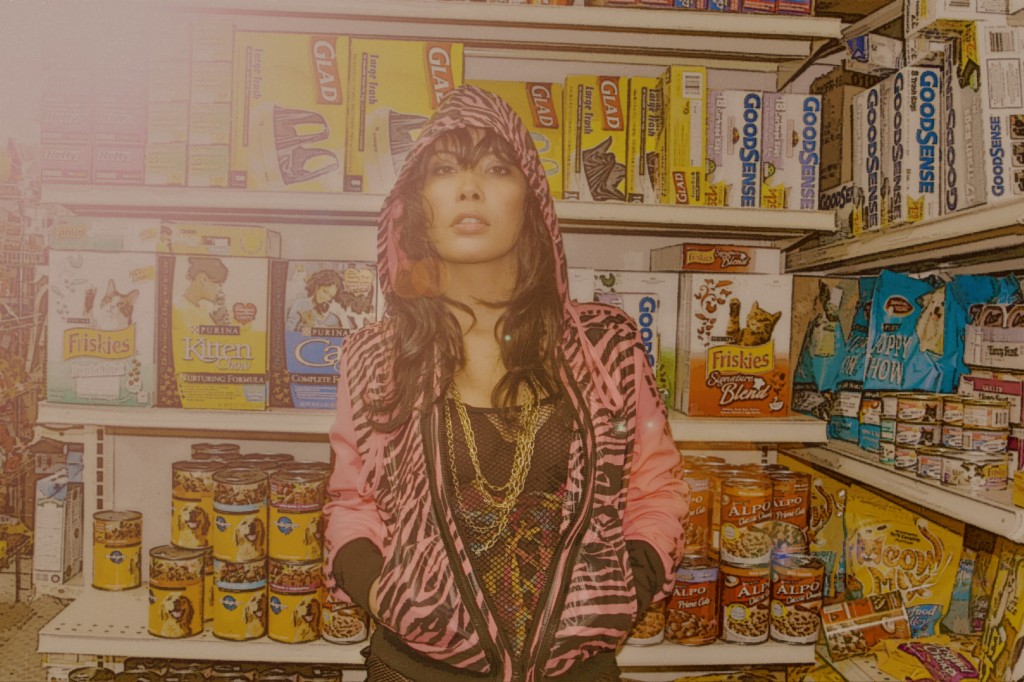 Brazilian-New Yorker baile funk vocalist Zuzuka Poderosa hits you with beats and a vocal style that is as fresh to these parts as fresh bread from your local bakery. She delivers rhymes in her native Portuguese over bumping beats. It doesn’t even matter whether or not you understand Portuguese; if you like badassness and dance-inducing rhythms, you will understand Zuzuka.

Zuzuka has been featured in magazines as far out as Time Out Singapore, Brazil’s Jornal Extra and blogs of the local grown variety like Remezcla. I had the opportunity to meet and chat with her in depth about her life and her musical journey.

She was born in Brazil to a Brazilian mother and Indonesian father and grew up in Rio. She moved to the Cayman Islands with her mother at age 16 and upon finishing school she came to New York City where she studied jazz vocal improvisation. She moved to Queens and started bartending while spinning drum and bass. After DJing for a few years and at the behest of her friends, Zuzuka moved from DJing to vocals and has focused on baile funk (otherwise known as “funk carioca”).

I was amazed to learn that Zuzuka is literally a one-woman show: she has no manager, agent, or publicist. She handles all of her bookings and interviews; often times press coverage on her isn’t solicited, she just finds out that she’s been blogged about through the grapevine. During the “day” (read: night), Zuzuka bartends in not one, but three, well-known NYC bars, which she says gives her the flexibility to record and perform. “Don’t get me wrong, I want a manager,” says Zuzuka. “You can’t just trust anyone, you have to be cautious. It’s about building relationships. The music business is not love at first sight.”

We briefly talk about being a working musician in New York City. “No one is making money doing music in New York City,” she says. She would like to perform more but given her schedule and the difficulty coordinating everything by herself, she is not able to do as much as she’d like. At one point she stops in the middle of the street and moves her arms about. “I’m like an octopus,” she says. “I have one tentacle here doing this thing and one here doing that.”

Still, Zuzuka has garnered enough attention to be able to collaborate on songs with producers around the world. In these instances, Zuzuka and the producer create the song through filesharing and she’s also been able to collaborate with local producers and DJs. She is known in Brazil as an artist in the neo-funk movement, a distinction made between artists who have been producing funk records since the beginning and the newer wave of funk artists. Zuzuka explains that there isn’t a baile funk “scene” in NYC but that hardly matters. By her description her shows are high energy and she has nonetheless been able to firmly establish herself in New York City’s underground music scene. This past March, Zuzuka performed for Dollar Van Demos which showcases local artists in a real, Brooklyn dollar van with real, dollar van passengers (see video below).

Zuzuka told me about her childhood in Brazil and her global family – how her parents met in Portugal, how her brother’s living in Costa Rica with his Costa Rican wife and children, how Zuzuka moved to the Cayman Islands with her mother, how she lived in Singapore for a year when she was a child and how her mother got her older Indonesian half-sister to move to Brazil with them, which she did. She took me to some of her usual spots including Ninth Street Espresso and the Tropicalia in Furs record boutique. There were also tales of how some guys who truly annoyed the shit out of her ended up becoming great friends and how passing an ex on the street made her stop and yell “Ewwwwwwwww!” at him before walking away.

Zuzuka’s easy to talk to and humble; she’s fun, she’s a motivator and a hard worker, and she does what she does. She loves coffee, her family, and making music. Bad ass music at that.

Joel from Tropicalia in Furs shows me Zuzuka’s Dollar Van Demo video. “Look at the walk,” he says, in reference to the way Zuzuka is walking. “That’s such a cool walk,” he adds. It is. And the badassness that ensues in the back of that van is both awesome and hilarious. Zuzuka’s music is awesome, that she is talented is beyond question. That she likes to make it fun is also beyond question. It’s funk and it’s in New York.