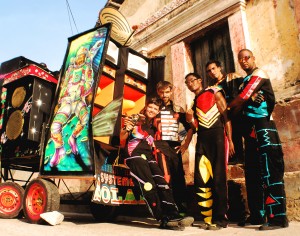 Systema Solar are among the latest of the bad ass Colombian bands tirando fuego from their homeland. This musical spitfire is the combination of a whole bunch of genres including cumbia, hip-hop, bullenrengue, champeta, house, techno among others (apparently) which they’ve dubbed “berbenautika”. Adding Afro-Colombian vibes by way of Colombia’s Caribbean coast, you get a musical fusion that sounds as delicious as Colombian food tastes.

The crew of seven met in 2007 at a celebration in Medellin and have since been touring Colombia. Their debut release, Systema Solar, is slated to come out on October 14th and needless to say, the jams on this record are top-notch. There are songs were the entire band sings the vocals, something I find only in Latin American music. It also has a way of making you dance while the underlying rhythms, lyrics and vibe describe harsh realities – Systema Solar’s songs paint a picture of what Colombia looks like, namely the Colombia that isn’t on the news. It’s young, it’s vibrant, it has a lot to say and it’s definitely gonna make you move.

The conjunto has had major breakthroughs this year including performing at SXSW this past March. With the release of their eponymous debut and the high demand for Latin alternative artists means these peeps are gonna be in the international market’s radar in no time flat.