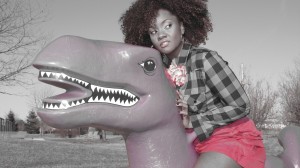 After listening to Mishal Moore’s opening set at Zee Avi’s show last weekend, I needed to know more about the woman behind the song “Makeup Sex”. Who is she, why does she play the guitar like a bass, where can I find more about this artist with such amazing breath control? The search for Mishal Moore was on, and it culminated with a Twitter and email exchange, the results of which are below.

Moore is a Miami native who’s been based in New York City for three years. A classically trained vocalist who also studied musical theater, Moore worked as a vocal coach for two years before deciding to embark on a music career back in 2002. She’s developed a following on YouTube posting original material and, on occasion, a song cover.

You can check out Mishal’s next performance dates and song, “Oh Lord”, below. Here’s our very inspiring and very candid interview with Mishal Moore:

Radio Morillo: I’ve read that you started out as a classically trained vocalist. How long were you singing classically and how did that eventually lead to what you are doing presently?

Mishal Moore: I studied classical music and theater in high school and college. I left college and was a vocal coach for two years and began my own theater company, produced and directed five plays. It was “hellish” but I loved every minute of it! I had a friend who was a recording artist and needed some background vocals and arranging done in the studio. After recording for her, the producer asked me if I’d ever considered recording music myself…that was back in 2002, the rest is history.

RM: At the Knitting Factory show you said how you play your guitar like a bass because you “can’t play it any other way”. What did you mean by that, as in, have you been playing guitar for a long time, or was that the only way you learned how?

MM: I’m musically inclined. I learned to play the piano and read music at a young age. I played trumpet for 8 years – marching band and all. I never really continued after I found I could sing (didn’t begin vocal training till I was 15). When I began recording, I was writing songs on the piano but found my ear was craving a different texture. My dad has/plays guitar, so I gave it a go. All you really need to begin writing a song is a bass line, anyway, so it worked. I’ve since, written songs with more chord progression and guitar-like stylings but can only play my songs. I was going to properly teach myself, but realized it would take away the nostalgia of my songwriting. I like having to figure it out as I make it up. [It] keeps me honest.

RM: What prompted you to start writing music?

MM: When I began production of my first album, Standing in the Rain, the producer I was working with, Gary Bosco, says “Okay, we’ve got to get you writing” to which I replied (homegirl neck roll and all), “..writing what?” I was so not a fan of having to write my own songs. It wasn’t till I realized having other people write songs for you (which by the way MOST mainstream artists have done for them…oops, cats out the bag) costs money. I had to get ‘ta writin’. Now, I can’t see me doing it any other way.

RM: When you started high school and college, what kind of career in the arts did you foresee yourself having?

MM: That hasn’t changed. I still have plans and dreams to star in a Broadway musical. And I don’t plan on being the “star” all my life, I LOVE being behind the scenes, teaching and coaching. Don’t laugh, but I have a blueprint of a theater after-school academy that I can’t wait to bring to life. “Mishal, loves da’ kids.”;)

RM: How would you describe your music?

MM: Simply put, my life. I write how I feel. I have many musical influences and refuse to put myself in a box (though I know others will). It took a few years to get into “my groove”, I wasn’t a songwriter to begin with. My first two albums (independently produced and sold) were quite the journey for me. I wrote alone, not sure what I was doing or if it was even good. To this day, I write alone. I met up with my producer and label in 2008, it’s been quite the marriage and I’m so happy that I’ve settled in with them. I have full control [of] my music and have released two singles, “Oh Lord” and “It Ain’t Over” (release date Sep 21 2010), equipped with house remixes. I like to keep my supporters on their toes. I’ve been told it’s hard to put my sound in one category, you just know it’s mine when you hear it, I like that description. My music will ALWAYS be honest, no matter what it sounds like.

RM: You’ve developed quite a following on YouTube. What prompted you to start uploading videos on YouTube and what opportunities have come as a result?

MM: I started uploading videos in 2007, it was scary.  I wasn’t sure about the whole “letting people watch me” in that reality TV way. My first few videos were all over the place, I had no idea what I was doing. I haven’t really gotten any life changing opportunities from YouTube. I’ve been featured twice and I’ve had such a great response from subscribers. It’s an outlet for me to share with people around the world, that ‘s good enough for me. YouTube is a tool that can introduce an artist to the world, but it’s up to the work and integrity of the artist to keep them (the world) interested.

MM: Don’t have one [lol]. This has been my career for 8 years. But don’t get me wrong, it has NOT been easy.

RM: What advice do you have for other independent artists who are trying to make music, tour, and balance a day job?

MM: I won’t lie, it’s extremely hard to have a day job and give 100% to your first love. [That’s] one of the reasons I quit my day job 8 years ago. What I can say is, if you aren’t willing to fall into your dream [i.e. get your hands dirty, break some bones…don’t worry you’ll heal;)] you’ll never really know how far you could have gone. At the end of the day, it’s important that YOU have the last say in your work. You can’t do that if you’ve got someone else telling you how to dress, sound and act. When you’ve faced and come out of hardship, repeatedly, just trying to do what you love, and you’ve gotten back up EVERY time, no one can take that away from you. They’ll have to respect you and your art, so I say, take a risk. You may surprise yourself…I sure as hell did.

RM: What would success in the music industry look like to you?

MM: This is it. Respect from my peers, being acknowledged from artists I’ve looked up to and making the music I want to make. It’s taken me 8 years to realize my definition of success doesn’t have to be like everyone else’s (fame, money, “bling-bling”). It’s more important for me to have the respect from people I admire. The industry has become so “high school”, when having a lot of “followers”, “subscribers” is what makes you “talented” or “newsworthy”. Of course, I’d like to be able to live comfortably off of what I do (and I don’t need $52 million a year for that to happen) and not have to worry about bills, who doesn’t want that? I’m happy to say, this journey so far has had its ups and downs but has never steered me wrong. I’m exactly where I’m supposed to be and only the Universe knows what’s in store. I’m looking forward to the next few chapters.

Here are Mishal’s next performance dates:

Here’s “Oh Lord” by Mishal Moore. Click HERE to purchase it on iTunes.