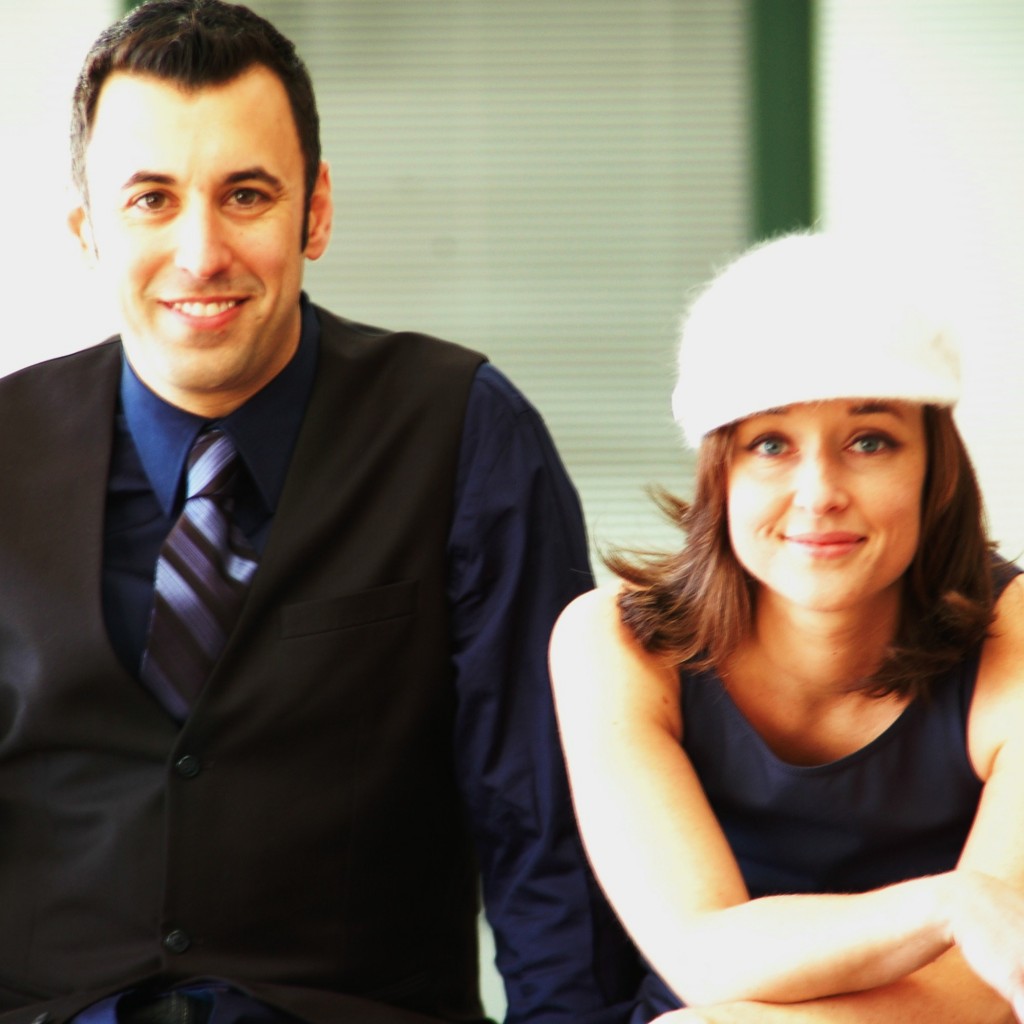 If one had to chart some points in the history of electric-soul duo Belle Boussole, these might stick out: a love of music-making (Bryan), happening upon a music career on accident (Nicole), a marriage (Bryan and Nicole) and a move to New York.

Belle Boussole’s Bryan McGurn and Nicole McGurn came to music through different avenues but their musical compatibility is undeniable; they create soulful and electronic-infused melodies that put them in the same categories as dance pop bands like Jamiroquai, Madison Avenue and Deee-Lite. Though these bands had their heyday in the ’90s, Belle Boussole’s music sounds timely without sacrificing melodies. Today’s dance, pop, and electronic music can hardly be praised for the originality or complexities of their melodies; in fact many acts have stopped writing melodies altogether and settle for “beats” and noises that are cut and pasted.

We recently interviewed Belle Boussole about their musical influences, their backgrounds and the process of making their album:

Radio Morillo: Can each of you briefly describe how you got to where you are musically?
Bryan McGurn: The road has been long and dusty!  I’ve been playing guitar in bands since I was a teenager.  Being a guitarist I was naturally drawn to the blues and other roots music forms along with all the popular music I was listening to at the time.  I always, however, had a parallel music track running which was a love of electronic music.  This started with early ’80s electro-pop, and then carried through New Wave, to Industrial, to Rave/House in the early ’90s.  In the mid ’90s while living in Hong Kong I was exposed to acid jazz, which to me was the perfect blend of the rootsy, jazzy music which I had explored while learning to play guitar with the club sounds that I had, up to that point, thought of as being quite separate.

Nicole McGurn: I’ve always been a big fan and lover of music, but never thought I’d pursue making music myself.  I took piano and saxophone lessons as a kid and sang in the school chorus in 7th and 8th grade, but that was about as serious as I got with music in my young life.  I could always sing along with my favorite songs and knew all the words to songs on the radio, but I though everyone could do that.  Through Bryan’s encouragement, I sort of discovered my own singing voice and realized I was capable of writing my own songs.

RM: Where are you from? How long have you been in the New York City area?
BB: We both grew up in Morris County, NJ, approximately 50 miles West of Manhattan.  Our towns actually bordered one another although we didn’t meet until we started working for the same company after college.  We lived in Hoboken, NJ for about 7 years before moving up to New Paltz, NY in the Hudson Valley.

RM: What’s the inspiration behind the name “Belle Boussole”?
BB: Belle Boussole means “beautiful compass” in French.  Since a compass is a tool used to find direction, we liked the idea of our music giving us a beautiful direction in life. We also like the way the words sound together…kind of  like a play on words even if you don’t know what the words mean, bringing to mind “soul” music.

RM: When did you start making music?
Bryan:  I’ve been writing music for about as long as I’ve been playing guitar, but hadn’t written anything that I believed in until recently.  I think that the reason for this is partially that, a few years ago, I went back to school and completed a Music degree in Jazz Studies.   Ever since I became hip to acid jazz while living in Hong Kong I’ve wanted to imitate those sounds both as a guitar player and compositionally as a writer, but didn’t have either the writing or the playing chops to do so.  Now I feel that I’ve bridged that gap and can create compositions the way I hear them in my head.  Also, writing with Nicole has really been fantastic.  She has an incredible ear for melody and phrasing.

Nicole:  I wrote my first song just over 2 years ago, it’s called “Hard Rock” and appears as the last song on our album.  Bryan had been encouraging me to explore the musical talent he saw in me but that I didn’t really see in myself at the time.  So he said I should try to write a song.  I sat down at the piano and over the course of a week or so, that song emerged. Then we began collaborating on songs together, Bryan would come up with chord progressions and I’d develop the vocal melodies and harmony parts.

RM: What are your day jobs?
Bryan: Since graduating college I have worked as a software engineer with a few different companies.  I left my day job about a year ago, however, to get this album completed, and hopefully use it to start forging a career in music.  I attended an Audio Engineering trade school during summers while in college and worked for a while at a recording studio in Soho, NYC.  During that time I got to work with some top NYC producers and learned many of the skills which I’ve hopefully employed on the recording of the Belle Boussole album.  Apart from pushing this album because we love these songs and want people to hear them, I also hope the album will serve as a portfolio for me find other work in the music industry.

Nicole: I work as a data and reporting analyst for a well known culinary school in New York City.  Music is my creative outlet and alternative to cranking out spreadsheets.

Nicole: Success in music would be to find our audience and connect with them and create songs that capture the sound and vibe that we love…and financially be able to sustain it without having to keep a day job.

RM: Explain the process of making this album. Are you releasing it independently?
Bryan: Yes, the album has been released independently on my label, Wanderlust Sound.  We’re using CDBaby for physical distribution of CDs and all the major digital retailers for digital distribution.  In terms of writing, the album contains songs that Nicole has written, songs that I’ve written, and songs that we’ve collaborated on.  Basically the process is that we flush out the chords and lyrics first, and then I’ll start creating beats, guitar, bass, and synth accompaniment.  For those who are nerdy about production tools, I use Propellerhead’s Record/Reason software for everything!  We recorded just about everything in our pretty minimal home studio, and mixed right on the laptop.  We did send the mixes out to be professionally mastered.

RM: What advice do you have for other independent artists balancing a day job and their musical endeavors?
Bryan: Become a sponge for information.  With the new world of Music 2.0, gone are the days of the artists who had major support from labels with regard to getting the music produced, recorded, registered with PROs, marketed, distributed, etc.  Indie musicians now need to do all of this and more.  It’s easy to become overwhelmed as I do just about every day, but don’t be afraid to ask people who are a few steps ahead of you career-wise for help on EVERYTHING!