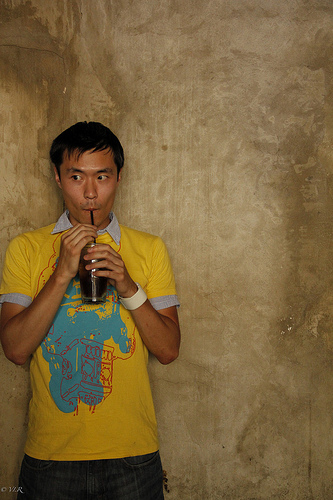 I’m always amazed at the things I find when I’m not even trying. Not that the road to Adam WarRock was as easy as a Genius suggestion on iTunes; he’s not even on iTunes as far as I know. It started with me following the FakeAPStylebook on Twitter, which led to me reading the Bureau Chiefs and then happening on an article WarRock wrote called “The Wackness and Creating the 2000s Hip-Hop Aesthetic”. I loved the article and wrote an equally lengthy comment to match.

Still I wasn’t prepared for what I would find. I got in contact with him and listened to some of his tunes with titles like “Ira Glass” and “Potemkin Villages” – the title for “Potemkin Villages” he says is “metaphor for how I’m feeling in life” – which are fucking great. His voice is strong, forceful, yet controlled and quite clear – ahhh, enunciation.  In “Potemkin Villages” his voice “pops” much in the same way the drum kit does in the background. Moments like this you wonder if the drums mimic the voice or if the voice mimic the drums – I digress, got caught up in an inner discourse about hip-hop. It’s a discourse we should be having more of lately.

But who is Adam WarRock? He is a combination of many things but the road that has brought him to where he is now is just as interesting as his music. An emcee based in Washington, D.C., WarRock recently quit his day job as an attorney (!!!) to pursue his music full time.  He’s expected to release his debut album this fall with DJ Ruckus Roboticus As a testament to the transition from “full time attorney” to “full time emcee”, WarRock has released the aptly titled track “Starving Artist” off of his forthcoming album.