Saturday was the last night for CMJ and by then I was feeling the effects of the previous 4 days, little sleep, being drunk every night, passing out on my couch rather then my bed, and exhaustion.

So when it was time to go see some bands on sat, I was relived that my night would start earlier than usual at Spike Hill in billyburg listening to some good ‘ol fashion rock and roll. 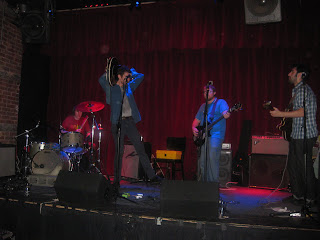 The first band to come on was Yoni Gordan and the Goods from Boston. There set was very interesting to say the least. They ripped through a few songs that were straight pop tracks, and then near the end, the lead singer, gets off stage and starts to interact with the crowd, talking about love in the club. It was funny to see him do an improv where he has a general theme, but just goes off the cuff depending on the crowd. Sort of reminded me of a preacher given a sermon on rock.

Yoni Gordon and the Goods – The Runaway

After a quick trip to pick up some $1 PBR across the street, we get ready to see the band we came here to see, Appomattox. 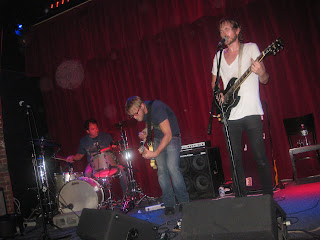 Appomattox consists of Frontman Nick Gaynier, Bassist, David Nurmi, and Drummer James Mello. They moved form Boston to NYC in 2006 to find a new home on the Triple Down Label. Soon after moving they recorded their full length debut, AO, in 2008.

In a nutshell, Appomattox is Rock and Roll, a throwback to the days when all you needed was 3 guys and a distortion pedal. Fast, heavy rock. The band has the three basic instruments to make a great sound and nothing more. The nice thing about listening to them was that even though they were loud and fast, their melodies and structure can be very palatable to the mainstream crowd. also i must give props to the drummer, he knows his stuff.

There were a few other bands after that I probably should have listened to more carefully, but by then I was just done, and wanted to chill.

Overall I think it was a sucessful CMJ, till next year….