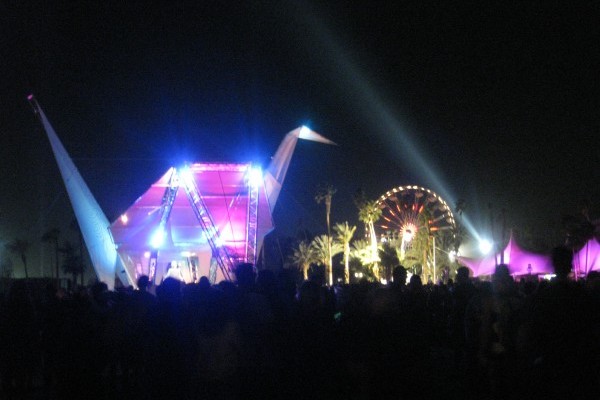 The final day of Coachella was quite tame compared to the rest. As we wake up we see that our neighbors are starting to pack up their campsite so that they can leave a little later after most of the show. This is sad because we are staying over Sunday night, leaving early Monday morning. Goodbye LA Neighbors (hello facebook).  Non-the-less we trek on like soldiers for the final day of music.

Like we said everyday, we really wanted to see the 12, 1 pm bands and we always started off with good intentions, but ultimately it never works that way. We really wanted to see Delphic, but one beer led to another, then we started to chill out, and by time we knew it was already past their start time.. bummer. No worries though, we mustered up our strength and made our way in to check out Rusko for a bit, then 2010 sensation B.o.B, aka Bobby Ray. I had heard of B.O.B before the show (his mixtape was dope) and was anxiously waiting to see him perform his perfect pop sound. He did not let us down. Bobby Ray has a lot of talent and energy, and it was very clear on stage. He was jumping around stage, interacting with the audience, getting down into the crowd and overall looked like he was having a blast. His guitarist was an ax master and it really payed off since guitar is a big element of his music. B.o.B is not as well known as some of other main stage artists, but he will be soon, that’s for sure. 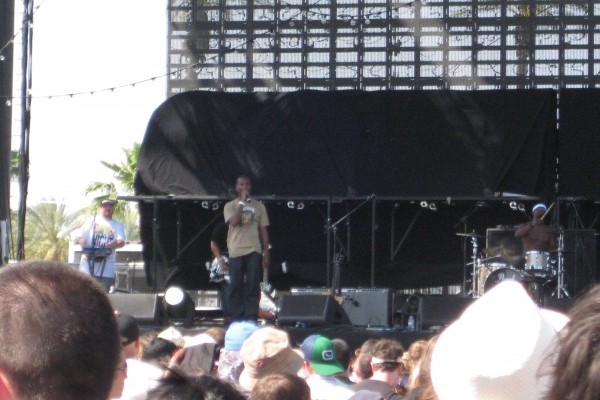 After B.o.B we headed over to Mayer Hawthorne and the Country, who was working the crowd like a hip hop show, but with soul music. It was quite an interesting site to see– some big dudes who you would think would never be at one of these shows singing every word of his songs, but hey that’s Coachella. After that we headed over to the Sahara tent to check out the very first performance of Glitch Mob, a group of producers from LA, who came together to bring some hip-hop/dub/glitch music for an hour. What made this performance cool was that fact that they were playing live instruments instead of Djing. It’s always a nice treat to see dj break out of their booths and play some real music every once in a while. Before we knew it, it was time to check out our next act, Florence and the Machine. They should have put them on a different stage because the tent they were in was way too small for them. We were so far back (way past the end of the tent) that it was very hard to see/hear them. We only stayed for 15 minutes because it was that bad.

After Florence we headed back to the campsite to gather some things, have a few cold ones, and get ready for the night shows (which did mean missing Spoon, but hey they are still around) After the typical lali-gagging that we seem to do, we make it back for Phoenix, who just like Florence, needed to be on a bigger stage. They rocked of course, played all the crowd favorites giving the audience a dancing good time. Oh you Frenches…. After Phoenix we decided to check out Little Boots. Apparently Sly Stone never showed up in time for his performance so they moved Little Boots up in time.

I saw Little Boots for her very first show in NYC in February ’09 and it was so great to see how far she has come since those first days with “Meddle.” She is an entertainer and a great musician. What made her show even more killer was that fact that she had a wicked laser light show to accompany the music. For a good 20 minutes, lasers, of all shapes, sizes and colors were flying everywhere in sync with the music. The lights added so much energy to the show that I even found myself dancing. We stayed with Little Boots until she finished playing “Meddle” then headed over to get something to eat while we watched Thom Yorke from afar. 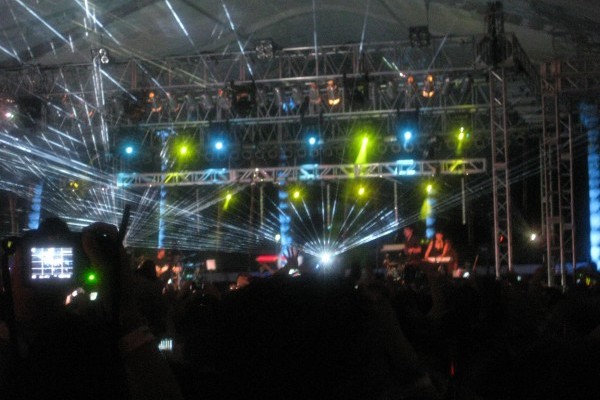 Thom Yorke’s new band, Atoms for Peace, was OK, nothing really special. They played all the songs from his solo album, The Eraser, a Radiohead tune, and then a really sappy, melodramatic acoustic encore that just wasn’t doing it for me, but that’s OK, it was time to see The Gorillaz. This was the first time since 2005 the Gorillaz had played a show, and the very first time they played it unmasked, to boot, they by far had the most interactive set of the whole festival. They had a huge screen behind the them on stage that provided the trippy visuals (Courtesy of Jamie Hewlett) that accompanied each song they played. You knew you were in a for a great show when the first thing you hear is “Welcome to the World of the Plastic Beach”  with a recorded vocal spot from Snoop Dogg. Even better, The Gorillaz synced it up with the music they were playing live. It was spot on for about 90% of the time. After that intro we knew it was going to be a blast. The Gorillaz played songs from all three of their albums and the crowd was loving it.Damien Albarn really put on a great performance. 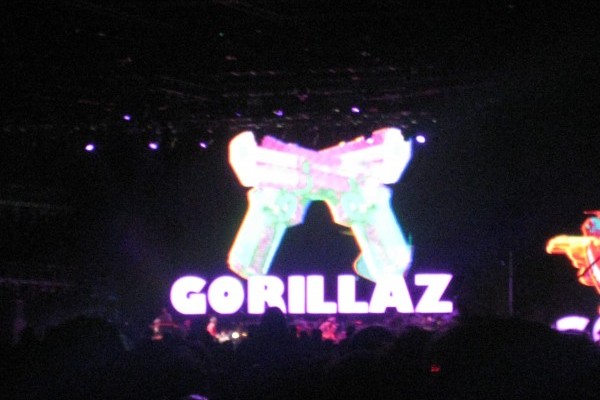 We headed back to the tent near the end of Gorillaz, had a few beers, and packed up some stuff for the trip back to NYC the next day.

Oh an btw. LA sux. ( i know the music scene is great, but man living there must be a big pain in the ass)