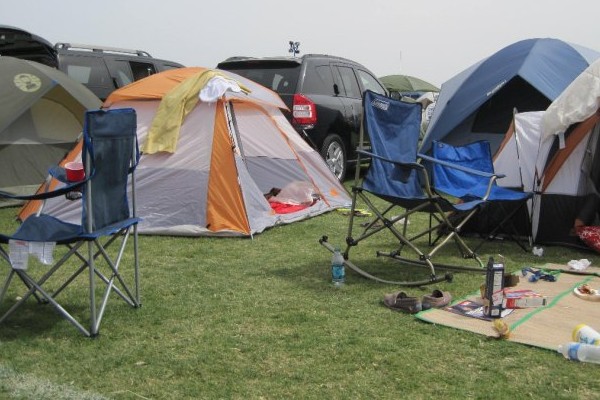 So, wake up around 8 since the sun is blistering hot already and drink our morning beers and hit the ‘Grack’. After that chill out session we decide to explore the grounds and see what else is around.

When we get back to the tent we chill out with some more beers and Grack. Michelle takes a nap and the rest of us chill, drink and chat. When we decide its time to check out the show its already 2:30. We decide that our first act will be Girls then Beach House.

When we get into the grounds we found a nice, cozy, grassy knoll to rest as we listen to the tunes from the Mojave tent. After Beach House, which has the perfect combination of indie and pop, we decided it was time to go back to the camp and amp up for the crazy dance party we were going to have tonight. (all the major dance acts were playing this night).

We finally get back to the grounds right around the middle of the set of  the XX.  The music was good, but the songs were just too slow for the time/day, but none the less they were good. After the XX we made our way to the dance tent to check out Bassnectar and all his dub glory. This guy was the shit. I’m sort of pissed we didn’t get to see more of him, but what we did see was amazin’–the dancefloor was going crazy, no doubt about that. After the crazy stampede of people leaving the show, we move up a little closer for Kaskade, who brought us his house friendly vibe for a while. Dancing the night way he teases the crowd with his old stuff and some new, carefully breaking it down at the right moment (her also had big ass balloons flying around during his set). I am a big fan of Kaskade and he didn’t let me down. 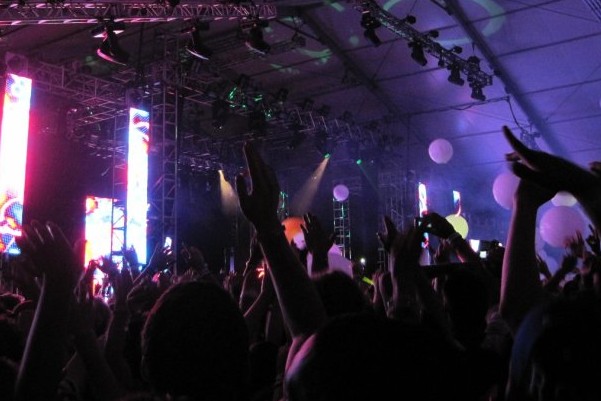 After Kaskade we made our way back to the outdoor stage to see MGMT. I was quite curious to see their performance as they have did a total 180 with their sound. They played a few new tunes which I dug, then the “classics”. What was good/smart about the act was that they played one of their classic tunes (can’t remember the name) on an acoustic guitar giving people a taste of their new sound. Regardless if they play psychedelic prog-rock or indie electro pop, people were loving it and they deserve credit. After MGMT we went back to see David Guetta, but he had finished by the time we got there. No worries, Z-trip was performing, and I’m glad we saw him. If you don’t know who Z-Trip is, its OK, he is  a little older. Z-trip is the original Girl Talk , but with more skillz and wicked scratching talent. He was mixing up rock, dance and hip-hop tracks from across the time line all while scratching over top of it. It was cool to see him do all this stuff live; plus the tent wasn’t that full so we got an even better listen/look.

After that we went to see the The Dead Weather who were really great live, very powerful and have great band chemistry. After The Dead Weather, we headed to see Die Antwoord, the latest buzz band. (if you don’t know who they are check them out)  They were cool, much better live then listening to them, but I have a feeling that they are a fad, and like all fads, they eventually end. After them We waited to check out 2 Many Dj’s. 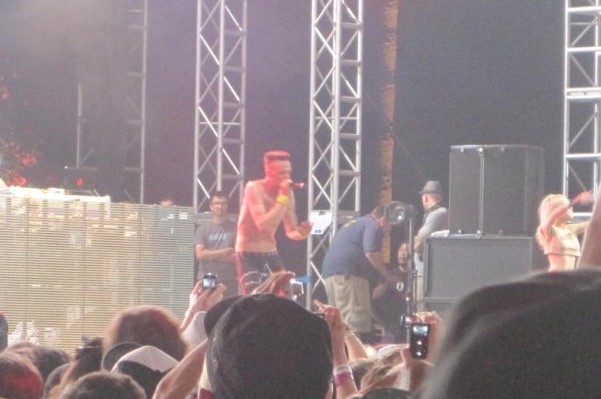 After the shows we made it back to camp only to find out that some scumbags stole our cooler with all our beer in it (and the ladies makeup). WTF!, WTF!. Luckily our generous LA neighbors had beer and Jameson for us (as no they didn’t steal the Grack)

The night ended with me wasted and passed out.. Great Fucking Time.