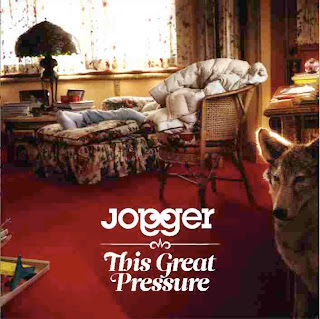 Jogger is an American singer/songwriter duo consisting of Amir Yaghmai on violin and guitar, and Jonathan Larroquette on laptop and controllers, with the vocal duties divided between them. Their sound is very experimental, often building completely new songs from “sonic scraps” to make something you have never heard before.

Jogger’s first full-length album, This Great Pressure is the product of those sonic scraps. Initially, Jogger had almost no idea what type of music they wanted to create, but they had a room full of instruments, hardware, software, and seven years to figure it out.

This Great Pressure has 10 tracks that will make you sit down and actually dissect the music to hear what these guys have done. You have ambient textures, sound effects, weird synths, warped/mutilated guitar parts and sporadic vocals in the mix that are used differently throughout. Some highlights include “Bliss,” a dark, scary melancholic track with the most ridiculous warped vocal parts I have heard in a while and “Nephicide” which is this crazy D&B beat with heavy metal screaming vocals, only to be followed by this sweet, tender refrain.

One thing is for sure, the excess of time and labor that has been put into this debut has resulted in 10 complex songs that show themselves slowly over multiple listens– This Great Pressure will not disappoint, and will prob leave you saying WTF!, but in a good way.

This Great Pressure will be released on October 27th and will be the first release on Magical Properties, Daedelus’s new imprint.