Studebaker Brown Show Tomorrow Night at the Annex in NYC 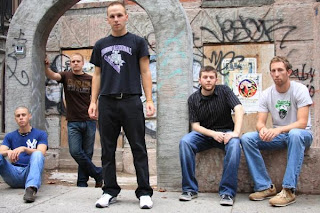 My hometown, Monroe, NY, is spawning some up-and-coming musicians lately. One of those bands, Stuedabakerbrown, has been building a following since I left High School.

Stuedabakerbrown has been playing the New York City rock club circuit regularly for several years now, but after a break from NYC shows, the indie rock group returns to the Annex on August 12th to kick off a string of downtown gigs over the next few months.

The northern suburb-based five-piece (composed of Pete Marotta/Lead Vocals, Eric Sosler/Bass Guitar, Josh Pratt/Drums, Michael Esserman/Guitar, Steve Kondracki/Guitar) is prone to energetic live shows that inspire plenty of drinking and dancing. Their music is catchy and combines an awesome indie rock sound with stuck-in-your-head pop melodies. Pete Marotta’s voice/lyrics invoke sounds of Rob Thomas giving the songs the energetic, but sweet sound that will make any girl want to take their clothes off.

Stuedabakerbrown will be playing at The Annex (152 Orchard St) this Wednesday (8/12/09) with the jam band/comedy collective Thursday Night All Stars, Hoboken singer/songwriter Jeff Pilgrim, and Jersey Shore rock/reggae/rap group Midfall Drive. The cover charge is $8 and doors open at 8pm.

Check out their tracks on their myspace to get an idea of what these guys sound like and definitely check them out tomorrow. Good times are to be had.