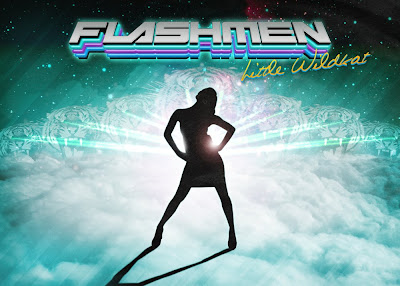 We here at BBC have been hooked on Flashmen since they first teased us with their 2 original tracks “Flashmen Theme” and “Little Wildkat.” Beautiful nu-wave disco sounds that get stuck in your head no matter how many times you listen to it.

We were even more pleased to watch them play their 2nd live show at Saturday’s BEMF. Bradly D, and Daniel E (with his “skirt and hospital scrub shirt.. amaizn) rocked all the hipsters for 30 minutes bringing such energy and gooey disco tracks that you couldn’t help but dance. I know I was, and I usually don’t dance!

Well, come Monday, once again Flashmen are knocking at our figurative “door” with their first (free) single, Little Wildkat. We have heard earlier versions of this track in some form or another, but now it has finally gotten a proper release, independent of a record label to boot.

Little Wildkat starts off with a bouncy arpeggiated bassline and adds in horn samples over a smooth dance drum track. The vocals are short and sweet and have enough echo to bring a haunting feeling to the lyrics. My favorite part is at the breakdown (around 1:20).

Besides the original, they have 4 remixes, all of which put a different spin on the track. The Infernal Devices Remix brings with it a dreamwave type feel that is perfect to listen to when you want to relax, while The Phantom’s Revenges brings in some of that french electro house we have come to love. The remix by Mr. Vega is a “made for the club” production that will need rave sticks and X poppin’ kiddies to fully enjoy. And last, but not least there is the remix by brooklynite Jemex who has chopped up the vocals and made a more electro-pop version of the track. All good in my opinion 😉

And if the tracks don’t get you, just look at the cover for the single — amazin’

Download the single pack and spread the love. Just remember…. the Flashmen are coming!