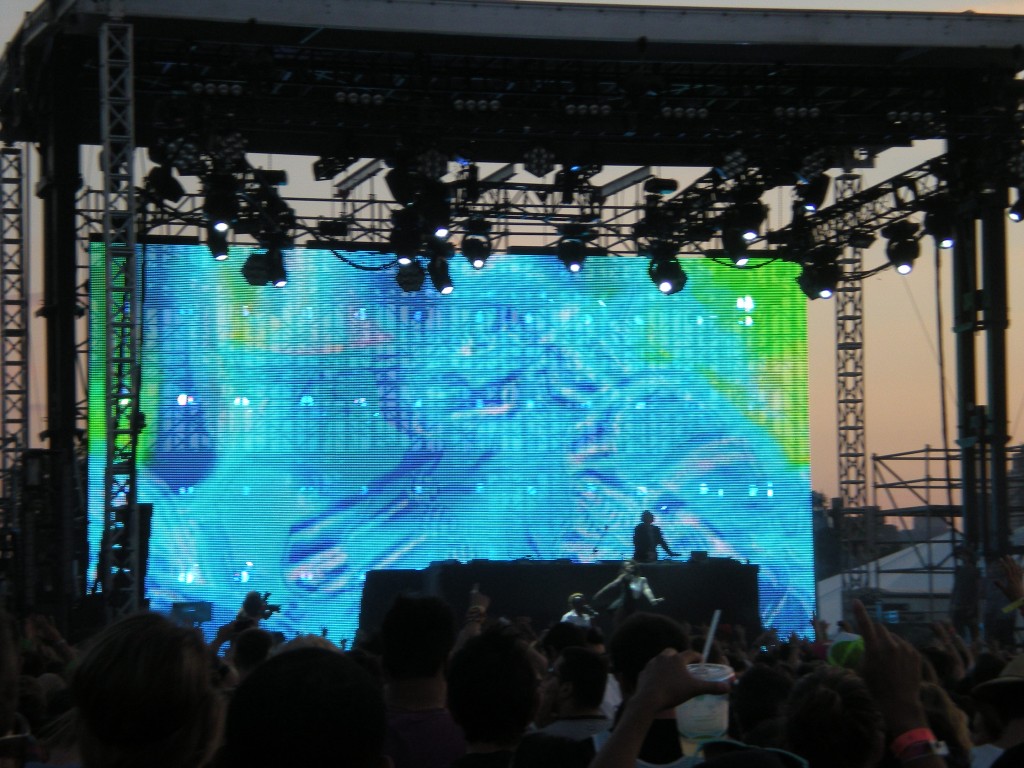 *NOTE: This isn’t meant to be a comprehensive recap of the festival, just a review of the sets we saw in full*

Whoever said Americans don’t appreciate electronic music doesn’t know what the hell they are talking about and they definitely haven’t stepped foot in the Electric Zoo Festival.

If you guys followed our voracious tweeting this past weekend, you’d know that Boomboomchik was in Randall’s Island  to give you guys the first-hand low down of what was going on. The two-day electronic dance music festival featured an astounding 70+ acts on four different stages playing from 11AM to 11PM as well as acts at the official after parties held in Pacha. We were right in there experiencing the event with the crowd and will recap a solid 24 hour festivals into an essay of a few hundred words. Here I’ll recap some of the acts I saw, round up my top three performances for each day, give some EZ recommendations and provide y’all with a wishlist of acts I would love to see perform in years to come.

I’ve no complaint whatsoever about Randall’s Island; the site was large enough to hold three huge stage tents and house a main stage, with enough room for amenities like food stalls, portable bathrooms and even art installations. The only complaint I had was of the scarcity of recycling bins and garbage cans. By night’s end you were waddling through dust and crushed plastic bottles and cups, though there’s so much you can ask a drunk participant to do.

You hardly felt you were surrounded by people (except for the times when you were surrounded in a tent) and the speakers in each tent were so loud you couldn’t listen to what was going on in the other tents. You could walk from one tent to the next and you would have a completely different experience.

Event organizers did an amazing job with transportation to and from the event. I took the bus both days without a hitch. After the last show, droves of people made their way to the bus line and even if you were all the way in the back, you would be in a bus five minutes later.

Saturday morning none of the tents were awfully crowded but the Hilltop Arena remained a top draw throughout the day. Glenn Morrison played the first set, drawing and warming up a crowd that went insane for Gareth Emery. Emery played an excellent set, smiling and dancing right along with the crowd the entire time. He was as excited to hear the next song as the rest of the audience and got the crowd (yours truly included) jumping, singing, and dancing. At one point there was a minor malfunction with the sound system and the crowd quickly chanted, “Gareth! Gareth!” until he managed to start his set up again a few seconds later. In the past few years, Emery has quickly become one of the most respected DJs and it was easy to see why – the man knows how to keep your attention.

I quickly headed over to the Sunday School Grove tent to check out Paul Kalkbrenner who was also working the crowd before heading back to the Hilltop to catch Markus Schulz. Admittedly, I was not captivated by Schulz’s set, whose energy wasn’t as fun or lively as Emery’s. Once Schulz wrapped up Afrojack came on and picked up energetically where Emery left off. Afrojack played a set with songs the audience was screaming to, including David Guetta’s “I Got a Feeling”, Simian’s “Never Be Alone”, and Swedish House Mafia’s “One” as well as some of his stuff. Afrojack danced (and I mean, really danced) throughout the entire set and had the crowd ready to spill over the barricades and onto the ground. Top notch shit.

The late evening I wandered between the Hilltop and the Main Stage, catching Dirty South and Major Lazer as well as Kaskade. Kaskade’s set is as dreamy as his music, and the crowd was definitely feeling his set. I headed over to check out Benny Benassi on the Main Stage, who disappointingly didn’t play some of his biggest hits like “Spaceship” (that or I missed it).

I ended my night early with Axwell who, as expected, played a fun, lively set. My man isn’t a part of an outfit called the Swedish House Mafia for nothing.

Sunday was a lot more crowded than the day before, and people were less sleepy and more pumped than the day before. I ventured over to the Main Stage where I spent most of the day and partied to Funkagenda. Luckily I managed to make my way over to the very front of the stage early on because when Laidback Luke came on, the place was packed tighter than a sardine can. There are no words to describe that set – Luke was a great performer, dancing, smiling, and engaging the crowd. When Jonathan Mendelsohn came out for “Til Tonight”, the song I’d been waiting for, I just about died. I started screaming the lyrics as Jonathan was singing. I’ve yet to hear a vocalist on electronic dance music records who have chops of that caliber, and Jonathan was every bit as good live as he was in the recording.

After Laidback Luke’s set I went over to see Above and Beyond perform in the Hilltop Arena and the crowd was so wild I could have been at the World Cup semifinal match between Germany and Spain. Imagine the screaming crowd, minus the vuvuzelas; imagine people jumping so damn hard you’d worry someone would get trampled to death. That was the atmosphere. It was easy to see why; Above and Beyond were captivating the crowd with their set in such a way that I you almost had no choice but to go crazy. It was riveting.

From the VIP tent I was able to check out Moby, Boys Noize and Fedde Le Grand, with Fedde being the only one who I moved to. Fedde wrapped up and Armin van Buuren came on. The significance of seeing that man perform was a huge one for me: I saw him spin at Crobar when I was 19 years old and have looked forward to seeing him since. Most of the acts I saw were house acts, and AvB was a welcome change. He came out with his arms raised – the crowd knew this wasn’t going to be an average set. Already ten minutes in and I was moving every which way to the songs he played and it hit me that this man has it down pat. Laser lights beamed above his head and out to the audience; the music would work its way up to a crescendo before the beat dropped and everyone went nuts. AvB is like Lady GaGa (or vice versa) in both his musicianship and his ability to perform; this kind of shit requires some form of genius. Whatever it is, AvB has it, and he displayed it extravagantly at Electric Zoo.

Before getting too carried away, I went over to Sunday School Grove to check out a few minutes of John Digweed, and ventured to the Hilltop Arena to see the crowd going crazy to Steve Aoki. Definitely a way to round out the night.

Here are some things I wish someone would’ve told me:

1. Bring napkins. You’ll need it for the amount of dust that you breathe in through your nose, and what comes out ain’t pretty.

2. Bring your own hand sanitizer. Oh, and don’t look down when using the portable bathrooms.

3. If possible, wear close-toed shoes. Or face scrubbing your feet for hours when you get home.

4. Check the weather before you leave home. Sure, a light sweater doesn’t match your boom-boom shorts and the bra with fishnet shirt you are wearing, but it comes in handy when you are cold. I promise.

5. Or just bring a scarf. It’ll double up as cover-up in the night and as your face mask during the day (the amount of dust in the air makes it hard to breathe).

My Wishlist for Electric Zoo 2011:

2. DJ Tatana – under-rated for sure, this woman’s beats are something else. I definitely think the EDM scene need not sleep on its female talent, and Tatana has a LOT of talent.

3. Arnej Secerkadic – Yes, yes and YES to more progressive trance, Arnej’s has produced some solid tracks like “Tomorrow Never Comes” and “They Need Us.”

4. The Bloody Beetroots – The Italian duo’s brand of insane hard-house music is loud and in-your-face, not to mention they wear masks when they perform. They fit right in with the colorfully-clad festival-goers.

5. Calvin Harris – My man can spin and sing, simultaneously. Check plus.

6. Buraka Som Sistema – I will wish hard until by face turns blue to see Portugal’s latest and greatest export perform at Electric Zoo. The band produces and spins progressive kuduro, a dance music that originated in Angola and has been heavily influenced by European house music. If you need to give the audience a reason to dance, this would be it.

We wanna know: Who do you guys want to see next year? Who did you enjoy watching perform?